Also called Zylmex and made by Zyll Enterprises, these are usually three inch diecast vehicles with some larger plastic vehicles.

Zyll Enterprise Ltd. went out of business in March 1996 and sold their dies and trademarks to a firm in Hong Kong in 1997. Intex was the only importer of Zee Toys to the US until 1993, thereafter Motormax sold some some models.  Edocar and Sears produced a set of Pacesetters called "Roadmates".

Also called Zylmex and made by Zyll Enterprises, these are usually three inch diecast vehicles with some larger plastic vehicles.

Zyll Enterprise Ltd. went out of business in March 1996 and sold their dies and trademarks to a firm in Hong Kong in 1997. Intex was the only importer of Zee Toys to the US until 1993, thereafter Motormax sold some some models.  Edocar and Sears produced a set of Pacesetters called "Roadmates".

Zee Toys, Inc. offered Zylmex products in the United States until the early 1990s. Both Zylmex and Zee Toys are synonymous. Zee Toys appears to be the name used by the North American offices for this firm. Zylmex is a registered trade-mark of Zyll Enterprises, which appears to be the Hong Kong manufacturer. Zee Toys began in the late 1960s and was established in Los Angeles.

By the mid-1970s, the company was based in Gardena, California and a few years later, relocated to Long Beach, California. The early models issued were equipped with solid disk tires reminiscent of the Schuco "Modell" series. These were sometimes available in a picturebox.

Miniatures were issued in different series which were made evident by a number indicated on each baseplate.A letter was used as a prefix for model numbers including "D", "P", and "T". Various cars in the late 1960s by famous designers like Barris, Tom Daniel, etc. were identified with the Zylmex brand to compete with Hot Wheels. The early "Dyna-Mites" Fl racers, that are "Penny" (Polistil) knock-offs, were offered under the names "Texaco Scorchers", "Flitzer", "Diecast Metal Cars", etc.

There were also plastic commercial trucks that incorporated the "Zee" name on the front grill. It appears these were the first examples to use this name. Many castings eventually issued had the Zee Toys logo on the baseplate.

During the 1970s, Zee Toys issued models titled "Windracers", "Mini Macks", "The Competitors", "Rough Riders", "Super Vans", "Dynawheels", "Highway Patrol", and "M.A.S.H.". "Fast Wheel" was an assortment of twelve simple castings. The package identifies Zylmex and manufacturing by Zyll Enterprises. The castings have no window glazing or interiors. The brackets for the axles connect to the underside of the roof. Playart also issued this identical set.

During this same time period, "Krazee Wheels" as stated on the baseplate, sported very large exaggerated wheels. In 1971, these had rubber tires and later became plastic. The blistercard states, "Designed by George Barris of Hollywood". They were later called "Crazy Wheels" and dropped the Barris name.

In about 1981, Intex Recreation Corporation, also of Long Beach, became the distributor of Zee Toys in the United States. At that time the Intex name was added on the packaging. In the 1980s, they continued with "Dynawheels", "Victory Circle", "Wild Cars", and "Pacesetters". Pullback cars were included in a separate series in the 1980s. "Gas Blasters" were cars accompanied with a key. Canadian and European markets offered "Dart Wheels" in lieu of "Dynawheels". They were sold in blistercard and windowbox packages. Also during the 1980s another brand of diecast named MC Toy were issued as "Dynawheels" and "Pacesetters" along with Zee Toys/Zylmex counterparts under the Intex umbrella. These were offered in singles as well as a 50 car set. MC Toy castings were also available with light and sound functions and color changers. Eventually, the relationship between Intex and MC Toy ended. The MC Toy castings became known as Maisto. Zee Toys/Zylmex castings were also offered as Sears "Road Mates" and Toys 'R' Us "Fast Lane". P.K. Douglass of Canada offered "Dart Wheels", the name used for marketing in Europe as well. In the early 1990s, Zyll Enterprises Ltd. of Hong Kong replaced Intex as the American distributor and continued to market and produce Zylmex/Zee Toys. Their North American offices were located to Santa Ana, California.

In about 1995, Red Box Toy Factory Ltd. became the owner of Zylmex and subsequently continued to offer the various series from offices in Ontario, California. Two of the assorted series were the military themed "Action-Masters" and "Dyna-Trucks Trailer Set". The former included an assortment of HO scale tanks. Later, Red Box introduced a new name for diecast. Motor Max became the brand name and utilized some of the old Zylmex castings in addition to adding many new models. 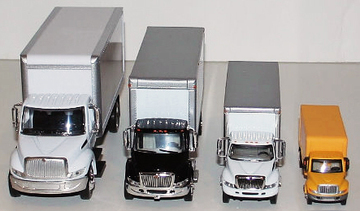